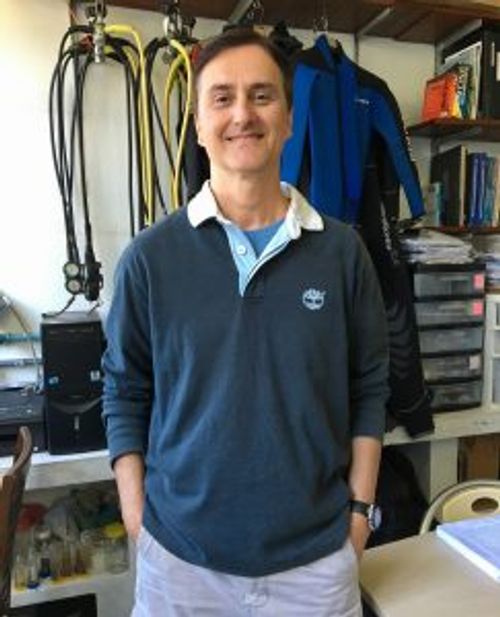 MISSION ATLANTIC scientist, Sergio R. Floeter, has been awarded as a 2022 Distinguished Fellow by the International Biogeography Society for his outstanding work on endemic fish of the tropical Atlantic Ocean.

Prof. Floeter is an Associate Professor at the Federal University of Santa Catarina (UFSC) in southern Brazil. He completed his PhD in Ecology at UENF (Brazil), and Post-Doc at NCEAS-UCSB (USA). He is the coordinator of the Brazilian Marine Biodiversity Network and the Marine Macroecology and Biogeography Lab at UFSC, and co-PI on the Long Term Ecological Research of Brazilian Oceanic Islands. He has co-authored over 110 peer-reviewed publications, with over 6800 citations. He teaches vertebrate zoology, conservation, community ecology, macroecology, biogeography, science writing and communication, and reef fish ecology and conservation. He is also part of the Expert IUCN – Brazilian reef fish Red Listing.

Prof. Floeter was elected by the IBS Board of Directors as a 2022 Distinguished Fellow for his exceptional service to the field of biogeography and specifically, for his work on marine biogeography and macroecology, including the evolution and trophic structure of reef fishes, interdisciplinary fieldwork expeditions and large scale data analyses that have led to a better understanding of why and when the areas of fish endemism of the tropical Atlantic Ocean were formed, how they relate to each other, and what processes have contributed to faunal enrichment.

Prof. Floeter will receive his award at the upcoming 10th Biennial Conference of the International Biogeography Society in June 2022 in Vancouver, Canada.

Congratulations Sergio from all the MISSION ATLANTIC team!