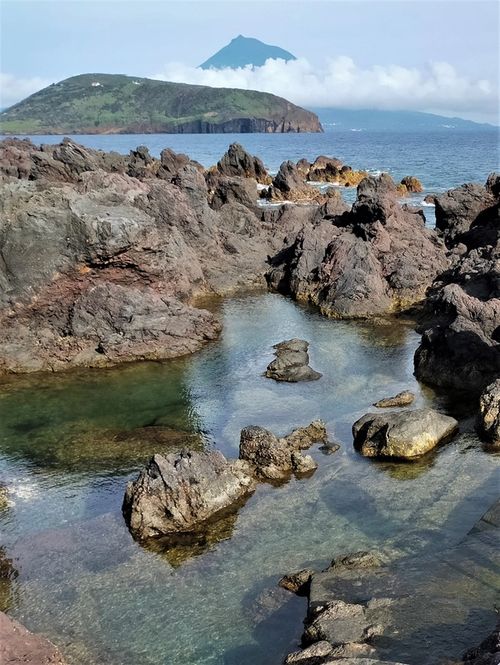 A stakeholder webinar and online survey were held by the MISSION ATLANTIC North Mid Atlantic Ridge (NOMAR) team in September 2021 to discuss and integrate the view of marine users and managers, in the Azores archipelago.

The webinar focused on introducing the MISSION ATLANTIC project to regional stakeholders, namely the Integrated Ecosystem Assessment (IEA) to assess the present and future state of marine ecosystems at the Atlantic scale. Regional stakeholder engagement and participation is one of the fundamental aspects of this type of evaluation.

The IEA performed in the Azores region illustrated a complex network of anthropogenic interactions in the ocean. In this work, we evaluated the linkages among 12 maritime sectors, 17 anthropogenic pressures, and 23 ecosystem components according to existing regional studies, monitoring programs, and expert opinions. In the graph below, lines indicate the existence of an interaction, while its thickness represents the magnitude of the associated risk.

A REMOTE ecosystem with MULTIPLE influences

The Azores archipelago is the most isolated archipelago in the North Atlantic Ocean, having one of the biggest Exclusive Economic Zones in Europe. The regional economy has traditionally been dependent on fishing, harvesting, agriculture, and livestock farming. Nowadays, tourism and new industries associated with the blue economy are emerging as important sectors in the region.

Remote archipelagos such as the Azores are usually recognised as key nature tourism destinations, described with pristine natural environments. Recently, the Azores won the “Best of Nature” category of the Sustainable Destination Awards and received the Platinum “Coast of Quality” Destination international award.

The geostrategic position of the Azores, at the crossroads between Europe and North America, poses important challenges for the use and protection of marine ecosystems. This is especially true for pressures associated with large-scale fishing on the high seas, the transport of goods on major maritime routes, military, and research exercises, and the installation of submarine energy and telecommunication cables.

Additionally, the impact of worldwide land and ocean-based contamination constitutes a global threat, generating an ever-increasing environmental threat to oceanic islands, progressively exposed to sources of pollution that little control of (e.g. marine litter, marine contaminants, and invasive species). Furthermore, climate change is expected to lead to complex changes in the community structure and food web dynamics in oceanic islands, due to the distinct number of endemic species and the potential risk of local extinctions.

Preliminary results of the IEA in the Azores

The size of the spheres demonstrates the magnitude of the associated risk to the marine environment. The risk is calculated by taking into account where it occurs, how often it occurs, and its severity on the ecosystem.

Stakeholders were also asked to respond to an online questionnaire about their risk perception in the region, and the main sources of information that influenced the responses. Participants attributed greater impact to more coastal sectors and pressures, such as wastewater treatment, sand extraction, and the influence of invasive species and severe erosion in some islands. Participants were mostly influenced by their personal and professional experience, and by media and scientific articles.

The preliminary results of this project highlight significant pressures in the marine environment and allow the detection of knowledge gaps related to the type and amount of information available at a regional level. This analysis can contribute to prioritizing management measures and actions for risk mitigation.

The MISSION ATLANTIC project will continue until 2025 to provide scientific evidence to support managers and policymakers on the need for environmental protection and monitoring. The next steps of the project include i) the development of a set of indicators and reference levels to assess the state and resilience of ecosystems; ii) an assessment of ecosystem risks and vulnerabilities in relation to future changes; iii) the continuation of stakeholder involvement and evaluation of management tools capable of reflecting a balance between ecological, economic and social objectives.

Stay tuned to missionatlantic.eu or follow us on social media for updates!