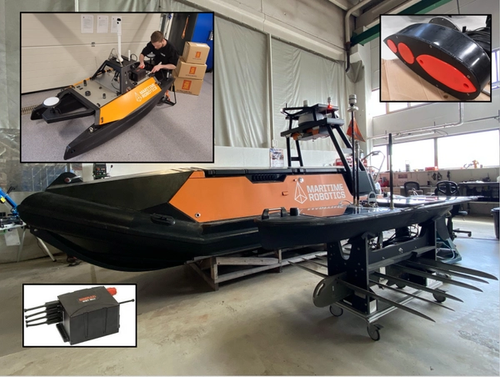 Scientific Echosounders are the flavor of the month at Maritime Robotics in Norway! Here Joel Pederick, Operations Manager at MARITIME ROBOTICS tells us why!

Last week the new echosounder transducers (38kHz and 120kHz) arrived! This is very exciting for the team here in Norway! The transducers and a SIMRAD WBT Mini will be mounted to the MISSION ATLANTIC Wave Glider which will be deployed later this year and will help the team to locate fish and map the seabed. The transducers and WBT Mini are specifically designed for small underwater vehicle deployments and can provide the same information that would be acquired from an echosounder on a very large ship. The transducers are unique as they have been specially manufactured to reduce drag in the water and allow the Wave Glider to maintain a good speed.

The Wave Glider is currently at our factory in Trondheimsfjord, but will be shipped to the Azores for its first deployment in September 2021. The first leg of the glider's mission will be from the Azores to the Canary Islands. From there, it will travel from Cape Verde to the Ascension Islands.

The glider will be equipped with a variety of sensors and gadgets for measuring conductivity and temperature, (Valeport CT Sensor), fluorescence (Turner Cyclops Fluorometer), dissolved oxygen (Aanderaa O2 optodes), and partial pressure carbon dioxide (pCO2 optodes), as well as a pioneering fish tracking device that can provide novel insights into fish behavior and survival (Vemco). A weather station (Airmar) and water speed sensors will also be mounted as standard, but the MISSION ATLANTIC Wave Glider is far from standard!

Stay tuned to missionatlantic.eu for more news and updates on the MISSION ATLANTIC Wave Glider and more!