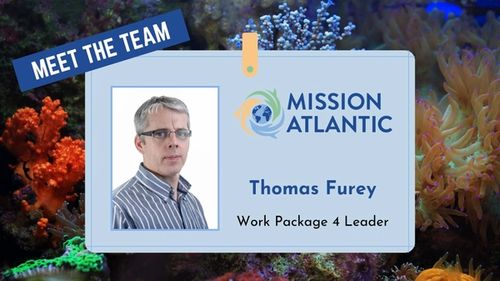 I am from Ireland and live outside of Galway city, on the west coast overlooking the Atlantic. I work at the Marine Institute which is also located there.

I have a degree in Earth Science, an MSc in Marine Geotechnics, and worked in 3D seismic exploration before getting involved in the Government of Ireland funded national seabed mapping programme, INFOMAR, which I now jointly manage with our partners Geological Survey Ireland.

My role in MISSION ATLANTIC builds on the need arising from The Galway Statement on Atlantic Ocean Research Alliance for increased collaboration and operational activity in Atlantic Ocean seabed mapping.

Within Work Package 4 on Benthic Mapping: ecosystem, resources and pressures, we are coordinating efforts by the project partners to collate existing bathymetry and benthic habitat data throughout the Atlantic. We are working with the international seabed mapping community to align and prioritise future survey efforts to best support societal needs and coordinate innovative research to leverage the evolution of technology to better inform future scientific outcomes.

Ongoing research within WP4 involves the application of machine learning to multibeam backscatter and bathymetry data to inform and expedite geomorphology mapping of the Celtic Sea, which is an important fisheries area, and of significance for the development of offshore renewable energy.

Take 10 minutes to write down what the Atlantic Ocean means to you! Here’s my 10 minutes’ worth!

“The Atlantic Ocean thundering waves crashing upon our rugged shores,

Burdened with discarded baggage of our insatiable appetite for destruction,

Yet calming seas extend a gentle handshake from neighbours on foreign shores,

Connected, understood, without spoken word, but with the ocean in our hearts,

Inspiring our exploration, our will to balance the scales in her favour.”

What is your highlight from the project so far?

As a people person and a fan of learning languages through immersion, the highlight of my involvement in the project was actually the in-person proposal writing meetings I attended. As the only geoscientist in a room full of Europe’s brightest benthic habitat mapping and fisheries scientists, oceanographers and ecologists, I had the pleasure of learning an entirely new scientific language! While digital meetings have allowed us to keep the project momentum going during the last 18 months, I look forward to getting immersed in dealing with some of the challenges ahead on the ground so to speak with the project partners and stakeholders, particularly the ones I haven’t met in person yet.